With around three weeks until Steve Earle rolls his tour bus into Belfast, we take a look at whats inspired him, where he has come from and take a look at his most recent work. If you ever had any doubt about where Steve Earle’s musical roots are planted, his new collection, So You Wannabe an Outlaw, makes it perfectly plain.  “There’s nothing ‘retro’ about this record,” he states, “I’m just acknowledging where I’m coming from.”  So You Wannabe an Outlaw is the first recording he has made in Austin, Texas.  Earle has lived in New York City for the past decade but he acknowledges, “Look, I’m always gonna be a Texan, no matter what I do. And I’m always going to be somebody who learned their craft in Nashville. It’s who I am.”

In the 1970s, artists such as Waylon Jennings, Willie Nelson, Johnny Paycheck, Billy Joe Shaver and Tompall Glaser gave country music a rock edge, some raw grit and a rebel attitude. People called what these artists created “outlaw music.” The results were country’s first Platinum-certified records, exciting and fresh stylistic breakthroughs and the attraction of a vast new youth audience to a genre that had previously been by and for adults. In the eighties, The Highwaymen was formed by Johnny Cash, Willie Nelson, Kris Kristofferson and Waylon Jennings. Their final album “The Road Goes On Forever” released in 1996 began with the Steve Earle song “The Devil’s Right Hand.” 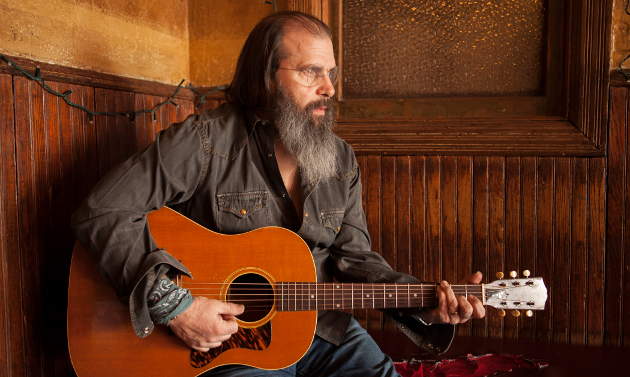 Steve Earle’s 2017 collection, So You Wannabe an Outlaw, is an homage to outlaw music. “I was out to unapologetically ‘channel’ Waylon as best as I could.” says Earle. “This record was all about me on the back pick-up of a Fender Telecaster on an entire record for the first time in my life.  The singing part of it is a little different. I certainly don’t sound like Waylon Jennings.”

“I moved to Nashville in November of 1974, and right after that Willie Nelson’s Red Headed Stranger came out. I was around when Waylon was recording [the 1975 masterpiece] Dreaming My Dreams.  Guitar Town (Earle’s 1986 breakthrough album) wound up being kind of my version of those types of songs,” Earle recalls.

“This new record started because T Bone Burnett called me and wanted a specific song to be written for the first season of (the TV series) Nashville. It was for the character whose brother was in prison. So I wrote ‘If Mama Coulda Seen Me,’ and they used it. Then Buddy Miller asked me to write another one for the show and I wrote ‘Lookin’ for a Woman,’ which they didn’t wind up using. I’d been listening to Waylon’s Honky Tonk Heroes again, and I decided to start writing in that direction.”

Check out @lucinda_williams, @steveearle, & @dwightyoakam rehearse for their collaboration on “Dim Lights, Thick Smoke (and Loud, Loud Music)” before the LSD Tour. ? @ms.emily.joyce

The new songs include the gentle, acoustic folk ballads “News From Colorado” and “The Girl on the Mountain.” “Fixin’ to Die,” on the other hand, is a dark shout from the hell of Death Row. “The Firebreak Line” returns Earle to his pile-driving, country-rock roots. “You Broke My Heart” is a sweet, simple salute to the 1950s sounds of Webb Pierce or Carl Smith.  “Walkin’ in L.A.” is a twanging country shuffle. The guitar-heavy “Sunset Highway” is an instant-classic escape song. And the deeply touching “Goodbye Michelangelo” is Steve Earle’s farewell to his mentor, Guy Clark, who passed away last year. “It was written right after me and Rodney Crowell and Shawn Camp and a few other folks had taken Guy’s ashes to Terry Allen’s house in New Mexico,” Earle says. “I was only 19 when I came to Nashville. Guy and Susanna Clark finished raising me. Guy was a great cheerleader for me.”

Earle is backed on the new album by his long time band The Dukes (guitarist Chris Masterson, fiddle player Eleanor Whitmore, bassist Kelly Looney, and new members drummer Brad Pemberton and pedal steel player Ricky Ray Jackson). “We did the Guitar Town 30th-anniversary tour last year,” he said. “And that was perfect to write the last of the songs for this record. Because I had the band out there with me, and we could try out some stuff.”

“I knew when I wrote ‘Walkin’ in L.A.’ that I wanted Johnny Bush to sing on it.  I’ve known Johnny since 1973 when I was playing a restaurant in San Antonio. Joe Voorhees, who played piano for Bush, and I were stoned and hungry, so we went to Bush’s and raided the icebox in his kitchen. We’re sitting there, and Joe goes white and says, ‘John!’ I turned around and there was a .357 Magnum pointed at the back of my head. So that’s how I really met Johnny Bush. Years later, he signed an autograph to me that said, ‘Steve, I’m glad I didn’t pull the trigger.’”

Steve Earle’s third duet partner on So You Wannabe an Outlaw is Miranda Lambert. The two co-wrote their vocal collaboration “This Is How it Ends.” “I learned from Guy Clark that co-writing might lead me to write some stuff that I wouldn’t write otherwise,” comments Earle. “The song is Miranda’s title, and some of the very best lines in it are hers.”

So You Want To Be An Outlaw is dedicated to Jennings, who died in 2002. The deluxe CD and the vinyl version of the album include Earle’s remakes of the timeless Waylon Jennings anthem “Are You Sure Hank Done It This Way,” as well as Billy Joe Shaver’s “Ain’t No God in Mexico,” which Jennings popularized as well as Earle’s versions of “Sister’s Coming Home” and “The Local Memory,” songs that first appeared on Willie Nelson discs. Nelson is his duet partner on the new album’s title track.

Listen to the new track I worked on with @marcribotmusic called, "Srinivas" which will be featured on his upcoming album 'Songs of Resistance 1942-2018' set to release September 14th. https://t.co/0VYkMOSnXH pic.twitter.com/7nIzqxNVMA

Steve Earle has turned many musical corners during his illustrious career. He has been equally acclaimed as a folk troubadour, a rockabilly raver, a contemplative bluesman, a honky-tonk rounder, a snarling rocker and even a bluegrass practitioner. This definitive Americana artist has won three Grammy Awards, for 2005’s The Revolution Starts Now, 2008’s Washington Square Serenade and 2010’s Townes.

He is also the author of the 2011 short-story collection Doghouse Roses and novel I’ll Never Get Out of This World Alive. Earle has been featured as an actor in two HBO series, The Wire and Treme, and on stage in The Exonerated. His film work includes roles in such respected features as The World Made Straight (2015), Leaves of Grass (2009) and Dixieland (2015). For the past decade he has hosted the weekly show Hardcore Troubadour for the Outlaw Country Channel on SiriusXM Radio and he is a longtime social and political activist whose causes have included the abolition of the death penalty and the removal of the Confederate symbol from the Mississippi State flag.

Earle has collaborated on recordings with such superb talents as Sheryl Crow, The Indigo Girls, The Pogues, Lucinda Williams Shawn Colvin, Patti Smith, Chris Hillman, The Fairfield Four and The Del McCoury Band. His songs have been used in more than fifty films and have been recorded by such legends as Johnny Cash, Emmylou Harris, and Joan Baez, Carl Perkins, Vince Gill and Waylon Jennings (who recorded Earle’s “The Devil’s Right Hand” twice).