In Review: Ashley McBryde and Luke Combs in Glasgow

Despite the wind and rain pounding the streets of Glasgow, a sold out crowd turned up to witness country stardom at the O2 Academy.

First up was Arkansa native Ashley McBryde. Equipped with only a trusty Fender Paramount guitar, the singer graced the stage with her presence, opening with the booming “Rattlesnake Preacher”.

Moving onto fan favourites “Radioland” and “Fat and Famous”, McBryde showcased her stunning vocal range. Despite battling a cold, the rockstar sang her heart out to the crowd.

While at times you could hear the crowd disrespectfully talking over her set, the singer maintained the focus of the majority of the venue’s audience.

Highlights of her set included newcoming song “Whiskey and a Gun” as well as her hit single “A Little Dive Bar in Dahlonega”. 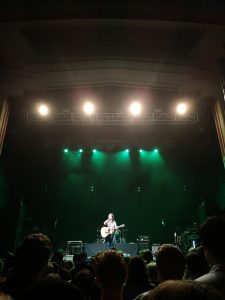 Her stunning voice, coupled with her genuinity and charisma with the audience, was nothing short of spectacular!

To top it off the singer mentioned she hoped to make it to Ireland some day – we at CMNI are hoping this amazing talent can it make to our shores soon!

Next up was headliner Luke Combs, backed by his amazing band! Opening with fan delight “Beer Never Broke My Heart”, Combs had the crowd tuned in from the start.

Singing much of his catalogue, it was harder to think of a song the North Carolina man did not sing!

A particular highlight was when Combs went acoustic, drawing the crowd into deep cuts such as “This One’s For You”.

Other highlights included Honky Tonk Highway, Hurricane and of course When It Rains It Pours.

With the loudest encore we have ever heard at CMNI, it did not take long for the rowdy crowd to welcome the singer back to the stage for an encore, including “Beautiful Crazy” and “She Got the Best of Me”.

Finishing his set by taking photos and autographs with the crowd, the superstar showed his appreciation in a big way!

Let’s hope both these stars can make it to the Emerald Isle sometime soon!