HOT COUNTRY KNIGHTS ‘THE K IS SILENT’ ALBUM DUE OUT TOMORROW, MAY 1ST

Some said this moment would never happen. But in spite of 30 wasted years and countless bad decisions, the ’90s influenced country band Hot Country Knights has come riding in to save Country music from itself, after signing a worldwide recording deal with Universal Music Group. The Knights promise to bring real ’90s Country music back to a format that’s been drowning in male sensitivity, cashmere cardigan sweaters and programmed drum loops by dropping one of the most musically satisfying debut albums in history – The K Is Silent.

Famous for never giving up on the dream of the ‘90s, the Knights spent the last few decades watching as country morphed from a proudly vigorous genre into something almost unrecognizable. But lead singer Douglas (“Doug”) Douglason, lead bass player Trevor Travis, lead guitarist Marty Ray (“Rayro”) Roburn, keytar/fiddle player Terotej (“Terry”) Dvoraczekynski, steel guitarist Barry Van Ricky and percussionist Monte Montgomery have the antidote as The K Is Silent puts the “T” back in country.

“Some artists out there tried to put the ‘O’ back in country, that was a thing for a while…. but what it’s really missing is the ‘T,’” band leader Douglas (“Doug”) Douglason said. “Country music has Low-T right now…it could use a pick me up, if you know what I mean. Those record label people over at Universal finally realized that only the Knights could be up to a task this big and hard.” 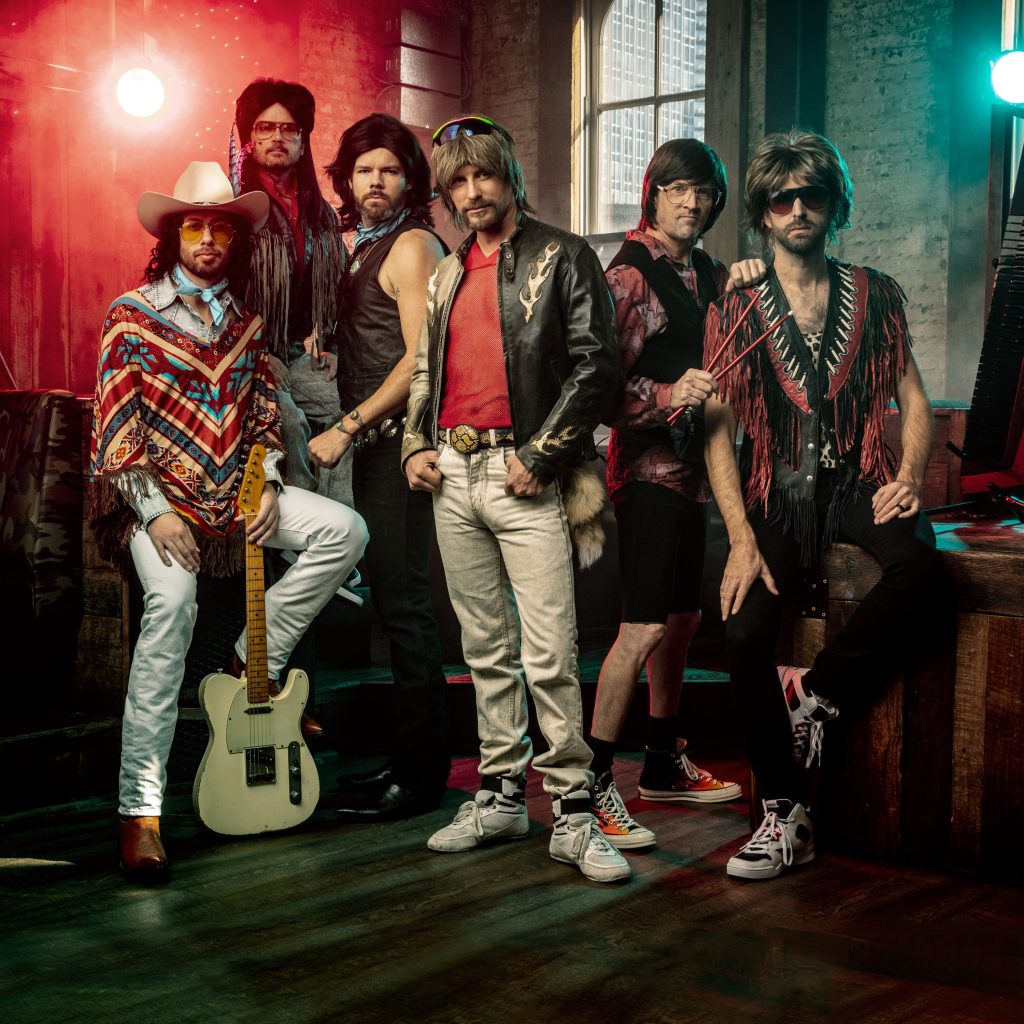 It’s a project built on the bounding rhythms and bright, organic euphoria of live Country music – with truly gratifying lyrics. The Knights are adamant about the fact they could have done it themselves. Instead, they allowed longtime admirer Dierks Bentley to produce – a partnership born from a deep sense of man-to-man pity.

“Boy he sucks, basically,” says lead guitarist Rayro. “I didn’t want to have to be the one to say it, but we’re helping him out, let’s just be clear there.”

“When [Dierks] first moved to town he was struggling, and he saw us crushing a big venue,” Douglason adds, although he can’t recall which Hooters’ parking lot it was. “We inspired him, so he thinks he’s paying us back in some way by offering to produce us – but we all know what’s really going on here.  He’s trying to grab onto the old mullet and ride it as hard as he can.”

Despite Bentley’s involvement, the Knights emerged with a collection they predict will have fans lined up around their local Tower Records and Sam Goody locations, with first single “Pick Her Up” getting the action started.

A classic barnstormer featuring rollicking guitar solos and a freewheeling guest appearance by ‘90s icon Travis Tritt, it’s a sound the band has dubbed “Hot Country Knights 101.” “We wanted to introduce our fans to what actual, real country music is,” Douglason explains. “None of that snap-track shit that’s out there now. So this is just straight ahead, balls-to-the-wall slapping out that tempo.”

Other unforgettable moments include the modern-day drifter’s lament, “Asphalt,” a touching ballad about the band’s curve-hugging motivation. As dedicated road warriors, they’ve basically lived out of a van their entire existence – even when they weren’t touring. 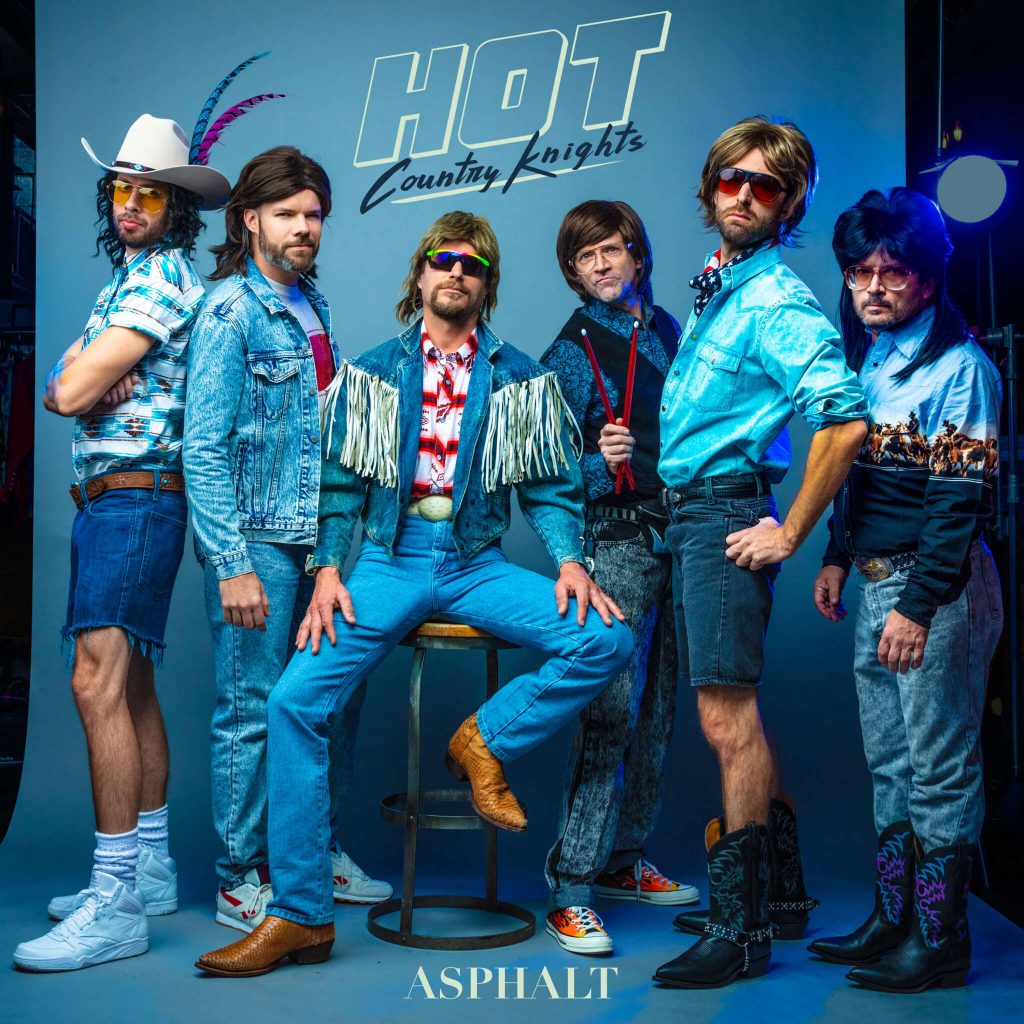 “The road calls and you answer,” says the Russian born Terry. “You go town to town, you meet pretty lady, share boiled-rabbit soup, glass of wine, and then you must move on to next town. It’s just the way it is.”

Meanwhile, standout cuts like “Then It Rained” recall the epic, weather-related smashes of the past. “Moose Knuckle Shuffle” hikes up its Lees to make a claim as the tightest line dance of all time.  And “Mull It Over” weaves romantic regret around an unintentional tribute to the band’s hair style of choice.

“Wrangler Danger” stands as a feel-good tribute to honky tonk Heather Locklears, and “The USA Begins With Us” works as a showcase for the band’s expertly-choreographed live act – along with a blast of good-old-fashioned patriotism.

But it might be “You Make It Hard” (featuring Terri Clark) which best represents the band’s High-T philosophy. With soft-focus sonics and a vocal blend dripping in desire, it simply erupts with passion like a waterbed in the night.

After all this time, some may ask “Why now?” The K Is Silent comes down to something much more … substantial. According to the band, they couldn’t just sit back and watch Country let its proud heritage droop and sag.

“See, we were out on the road singing a lot of other people’s hits, and we called them Greatest Hits because by us singing them, it made them great,” Douglason explains. “But this is a step beyond our Greatest Hits. This is all original material, and it’s the best stuff to come out of Nashville since like, 1999. I’m excited for the fans to hear it.”

“And I’m excited for them to buy it,” Rayro adds.