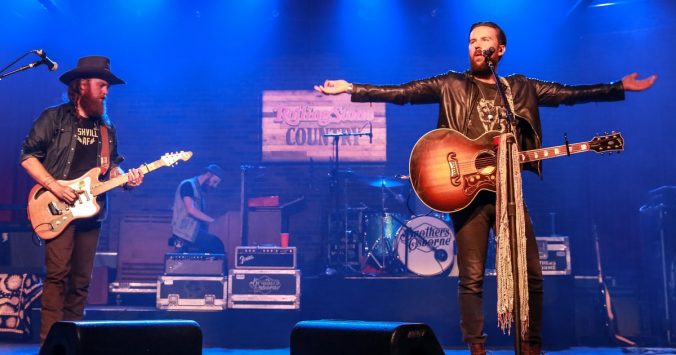 Brothers Osborne debut on The Tonight Show with Jimmy Fallon

Brothers Osborne last night  performed on The Tonight Show Starring Jimmy Fallon. Marking their Tonight Show debut, the reigning ACM and CMA Vocal Duo of the Year will perform their current single “I Don’t Remember Me (Before You)” which they co-wrote with Shane McAnally and Matt Dragstrem. “I Don’t Remember Me (Before You)” is featured on the duo’s critically-acclaimed sophomore album, Port Saint Joe, and continues to garner praise from critics with Rolling Stone calling it, “a stunner of a love song.”

Brothers Osborne now stands as five-time GRAMMY nominees as they are currently nominated for Best Country Album (Port Saint Joe) in addition to Best Country Duo/Group Performance for their “earth-scorching” (All Access) Top 30 single “Shoot Me Straight.”  These nominations join their previously nominated performances for their No.1 Platinum smash hit “Stay A Little Longer,” rowdy Top 10 Platinum hit “It Ain’t My Fault” and the nostalgic “21 Summer.”

The Maryland Natives are currently on the road as part of their headlining world tour which started in the UK and Canada and kicked off the US portion in front of a sold-out crowd in Chicago earlier this month. The duo continues to sell out every venue they’ve played so far with notable cities including London, Glasgow, Toronto and Detroit. The duo will hit over 40 additional markets through April including three sold-out dates at Nashville’s famed Ryman Auditorium as well as upcoming sold-out shows in New York, Boston and Philadelphia.

Cassadee Pope debuts new single “If My Heart Had a Heart”