The ‘Star of the Show’: Thomas Rhett’s European debut!

Thomas Rhett’s Mandela Hall gig was a memorable night – make sure you make it to his next show in November 2017! 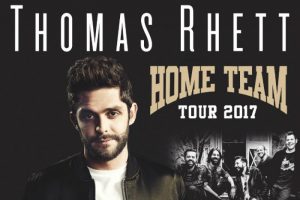 The 9th November 2016 saw a Northern Ireland debut for American country star Thomas Rhett. Opening the Mandela Hall show was Rhett’s Father and legendary singer-songwriter Rhett Akins. Armed with an acoustic guitar, he warmed the crowd up with a mixture of his self-penned songs for stars including Luke Bryan, Blake Shelton and Jason Aldean as well as classics from Hank Williams. The crowd loved this addition to the show, and he made for a charming start to his Son’s debut.

Then the main show began, with Thomas opening one of his first European gigs with a few familiar favourites from his latest album “Tangled Up”. His intoxicating, velvet voice filling the room, Rhett’s energetic performance created a huge buzz amongst his audience. Crowd favourites included “Die a Happy Man”, and “Star of the Show”.

Rhett’s infusion of Country and Pop was impressive, jumping from his own “Crash and Burn” to a version of DNCE’S “Cake by the Ocean”, then later Bruno Mars’ “Uptown Funk”, all with a country twist to them.

One of the highlights of the night was Rhett’s performance of Garth Brook’s classic and all-round Country anthem, “Friend’s in Low Places”. This most definitely was a special point of the evening, and you could see the gratefulness and surprise on Rhett’s face from the noise of a crowd of just 1,000.

Thomas Rhett will be rolling back into Belfast on 15th November 2017, playing the Waterfront Hall and supported by Old Dominion! A gig not to be missed!