EXCLUSIVE: An interview with Jordan Mogey

With the release of his new album, ‘Cowboys, Drifters and Angels’, Jordan Mogey is fast becoming one of Northern Ireland’s upcoming country stars. We decided to catch up with the Ballymoney man to discover what it’s like to be riding on such success…

Jordan, a big well done on the launching of your new album, ‘Cowboys, Drifters and Angels’. Would you say this is your most enjoyable record to date?

Thank you very much indeed. I’d say this one is more of a step in the direction I’ve always wanted to go, consisting of mainly original songs. Although in saying that, I enjoyed recording my two previous releases just as much. I love getting into the studio. It’s probably my favourite part of being a recording artist.

It’s always very difficult to choose when it’s your own music, I can be very self critical sometimes. I often get told I’m a perfectionist. This is more than likely true. I like ‘My Drifting Angel’ which is a song I started writing at fifteen. I’d completely forgotten about it until I found it in an old notebook last year, I added a melody and made a few edits and I’m really pleased with how it turned out. It’s a song about letting someone you love go in the hope they might come back someday when they’ve done the things in life that they need to do.

The album has a heavy traditional American country influence, as well as some influence from the Irish country scene. What were some of your main influences in achieving this sound?

In short, it’s the only way I can sound. I grew up hearing the likes of Hank Williams, Tompall & The Glaser Brothers, Marty Robbins and Webb Pierce. Perhaps that style has rubbed off on me, it honestly just comes naturally to me, and for that I’m truly thankful.

You have become well-known for your songwriting ability, helping to write several tracks on this album, as well as singles for other local singers, such as Alastair Coyles. What do you enjoy most about songwriting?

Songwriting is a very spiritual thing for me, I can go anywhere on a page with no limitations. It’s a therapeutic release, some might even call it a coping mechanism. I can’t go a day without writing something.

Who are your main influences for your songwriting?

There are so many, some of my favourite songwriters are Hank Williams, Blaze Foley, Billy Joe Shaver and Kris Kristofferson.

You have written a lot with Joe McShane – has he been a main influence in helping you to craft your songwriting abilities?

Joe has become like a brother to me and he’s a very gifted writer. I admire him and love him dearly. Not a day goes by that we aren’t in contact. People like Joe are rare and I treasure his quality as a person and a writer.

You grew up in Ballymoney, North Antrim. Has the area and its people influenced you at all as an artist?

Well, North Antrim people have always been famous for being ‘laid back’ and ‘down to earth’ so I do believe where I come from has an influence on me not only as an artist but as a person. We don’t get to excited about successes and we seem to stay ‘ordinary’ people no matter what we’ve achieved. I hope this shines through my personality.

What are you plans for the rest of 2017? Any festivals, concerts or dance dates people should look out for?

Yes, I’m starting a tour on the 16th of June with Will Bannister (New Mexico). I’ll be appearing with Nicky James and Jake Carter all across the UK and Ireland on that tour. Then in July I head away with my good friend Mary Duff on a UK tour. When I return in July I’ll have a week or two to myself before being part of ‘Party on the Pitch’ at the rugby club, Ballymoney in August.

Make sure to grab your copy of ‘Cowboys, Drifters and Angels’ now from Sharpe Music – you won’t regret it! 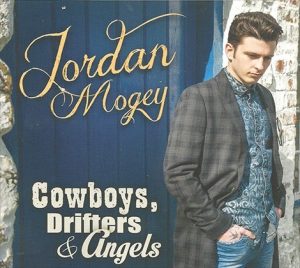