Telling the truth and following your heart: In Conversation with Charlie Worsham

We recently had a chat with singer-songwriter Charlie Worsham, as he gets ready to embark on a European tour with Lucie Silvas and visit Belfast on November 19th – see what he had to say about his new album, European fans and his new book below!

After releasing his second studio Album, “Beginning of Things”, Charlie Worsham is out on a mission – to tell the truth, write great songs and follow his heart.

When we asked him what the main inspiration was for this new record, he said that it was “always to try and figure out what the truth is, and tell it”. Indeed, when writing his new album, Worsham dedicated himself to writing a page, on his journey to becoming a better songwriter. 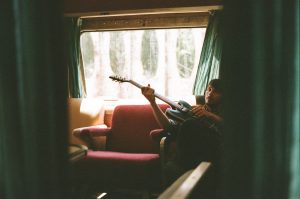 Whilst Worsham has poignantly struggled in the past as a singer-songwriter  on mainstream country radio, he says that this new album represented an opportunity to “fall in love again with music” as well as cherish his own “musical geography” of Grenada, Mississippi.

Charlie Worsham on his new album

Whilst other country artists often have a favourite track on a particular record, Worsham can’t pick, “I love them all for different reasons”. Indeed, he says that when writing songs, he believes that “songs need to be snuck up on, if an idea knows that you’re coming for it, it’ll escape”.

Later this month, Charlie will be releasing his new book “Follow Your Heart”, in aid of his Follow Your Heart Arts Programme in his hometown, giving kids the chance to obtain a musical education. When asked about how the project came about, Worsham stated that his friend Peter Cooper and his book “Johnny’s Cash and Charlie’s Pride” inspired him to write the book, along with his “Follow Your Heart” tattoo.

Charlie Worsham on his new book

Talking about the “Follow Your Heart” Arts programme in Grenada, Worsham believed that for some of the kids involved, it could be “their ticket” for the future or simply a “safe place”.

Lucie Silvas and Charlie Worsham will begin their tour on 13th November 2017, heading to Amsterdam, the UK and Ireland. Talking about the tour, Worsham said he was not only excited to be touring with “the gem of a human being” that is Lucie Silvas, but it would be the first time he would be playing with a band in Europe.

Charlie Worsham on visiting the UK and Ireland-1

When asked what he enjoyed most about visiting the UK and Europe other than the fans, Worsham would describe himself as a “plain tourist”. Indeed, if he hadn’t been a touring singer-songwriter, he would have lived to have been the chef Anthony Bourdain, as he loves travelling so much.

“I love the culture, history, people, beer, food, I love all of it!”

When we tested Charlie’s knowledge of Northern Ireland, he knew that the word “craic” meant good conversation, but he was stumped when we asked him what a “gravy ring” was. Charlie seems to be a fan of a good Ulster Fry though, declaring “I love how y’all do breakfast over there!”.

Make sure to catch Charlie alongside Lucie Silvas, when they take their tour to the Limelight in Belfast on Sunday 19th November! 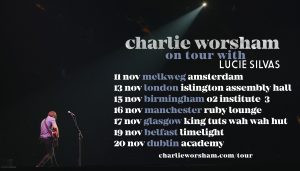 What a tune, and what an award for @blakeshelton .

Another one for the mantlepiece for @olddominionmu