Northern Ireland music fans were spoiled for choice this past weekend with a trio of Nashville artists hitting Belfast stages.  Whilst Kendell Marvel and Brothers Osborne were rocking the Limelight, fellow Nashville resident Jenn Bostic brought her “Revival”, UK album release tour to a specular close with a Sold Out show at the nearby Crescent Arts Centre.

The venue was packed to capacity, with Bostic revealing during her set that they were not only sold out but actually were over sold, having managed to squeeze in another few seats so as not to disappoint those keen to see the songstress in person.

The evening began as Gary Quinn, an Omagh native who now resides in Manchester, took to the stage and quickly captivated the crowd into an attentive hush.  Quinn played a seven song set, which much like his recently released acoustic album was a mix of both old and new material.  Listening to songs such as “He Don’t Show Her Anymore” and “Crazy Idea”, which deal with the ups and downs of long term relationships and the effort required to maintain them, it was clear to see why Quinn is a five time British Country Music Association Awards winner.  Of the new material played the most impressive was undoubtedly “Warm Dark Of Night”, co-written with Grand Ole Opry member Steve Wariner, the song is an engaging classic in the making and to my ear lyrically reminded of Kris Kristofferson, an artist whom Quinn (thanks to his father) cites as an early influence.  Quinn closed out the set with the upbeat “I love to watch you leave” which raised the tempo and laughs in all the appropriate spots. 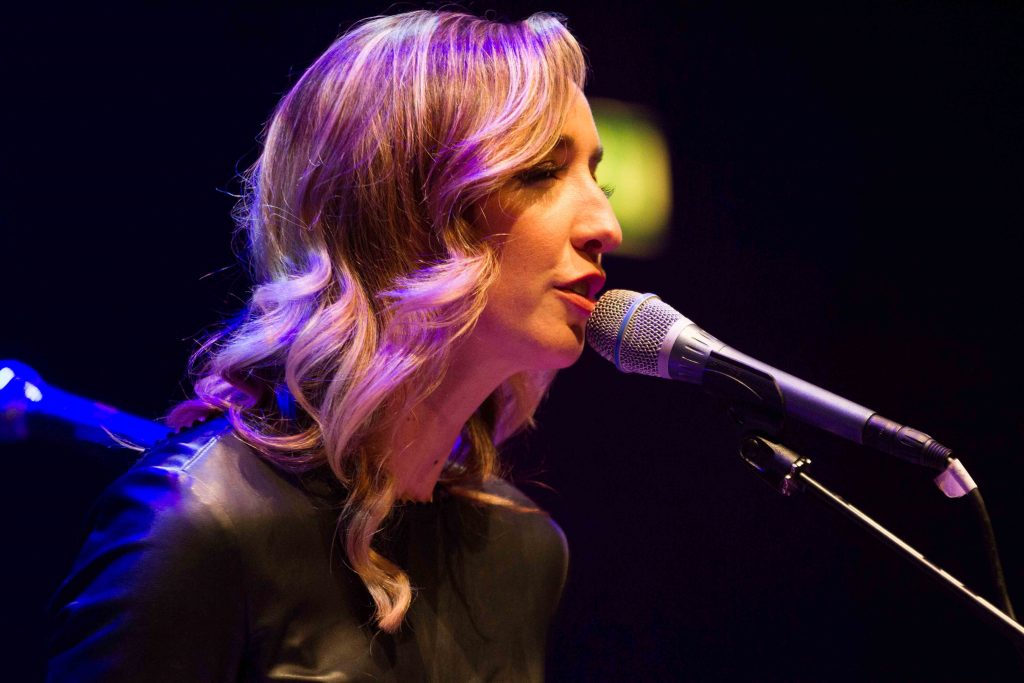 With a fully warmed up crowd it was then time for headliner Bostic to take centre place and she did so in style.  Accompanied by her full band, for the first time in Northern Ireland, Jenn took to the stage and kicked off her show with the lively “Wrong Thing” which thanks to her bluesy vocals was the perfect way to let the crowd know they were in for something special.  This strong opening was then followed up by the powerful and funky “Haunting Me.”  Throughout the rest of the main set list Jenn continued to focus mainly on songs from her new album “Revival” which had been released the day before the Belfast show.  The only exception being the previously released, and ever popular “Not yet” (a powerful hope filled ballad about the determination to refuse to give up on your dreams) which sat perfectly alongside the new tracks with their positive, honest and at times raw emotional beats.

Over the course of the night, songs such as the catchy pop/gospel sounding “Hollywood” (which encouraged audience to participate to ‘raise em up’) and the rousing “Lamp” demonstrated why she has such a loyal and growing fan base in Northern Ireland, one which enabled her to easily sell out the venue.  Jenn commented from the stage that she has so many special friends here that ‘coming to Northern Ireland feels like coming home’, especially as her father had Irish roots and how when she looked around the venue ‘it felt like it was filled with family’.  It was clear that she was humbled by the support from the crowd, even stopping during her set to ask if anyone had any requests, and then inviting one audience member, who could not remember the name of the song they wanted to hear, to come up to the stage with their phone so they could pick it out.

Two other notable standout moments from the evening, which demonstrated her ability as both a performer and as a singer song writer, were her performances of Bonnie Raitt’s “Love Me Like a Man” and “Somebody’s Someone,” the latter which she co-wrote with, and has been recorded by fellow Nashville artist Daphne Willis.  Before performing the bluesy energetic cover of “Love Me” Jenn shared with the audience that Raitt has always been a personal hero and that this song was one of the first she performed in public, as part of a hometown band made up of a number of her father’s friends and her own former teachers when she was just sixteen years old.  Listening to the performance it was clear to hear that this was a song which had been perfected over many years and her version was comparable, if not equal to that of Raitt herself.  It was also the perfect track upon which Bostic was able to take a moment to shine a light on her band, Eddy White on guitar, Ally McLachlan on base and drummer Belinda Webb, whereby each had an individual moment in the spotlight to demonstrate their skills and to show why they are Bostic’s go to band when in the UK.

The high energy of the Raitt cover was contrasted with the stripped back “Somebody’s Someone” a song which Jenn said she was playing for the first time on this current tour and which came from extremely personal space.  The emotion in Jenn’s performance was clear to see and you could have heard a pin drop, as the gripping vocals spread out across the room.  With a hook to which almost everyone can relate, and which is hard to forget “You’re somebody’s brother, somebody’s son, somebody’s mother, father, somebody’s someone. Somebody’s missing you wherever you came from, where ever you go I hope you know, your somebody’s someone” this is a song which is just crying out for Bostic to record.

Jenn then brought the show to close with her latest single, and the title track of her album ‘Revival.’  The uplifting high energy gospel styled song had then audience calling out for more, and she did not disappoint.  Returning to the stage for an encore featuring “Jealous Of The Angels” which after many years, and having been covered notably by both Donna Taggart and Nathan Carter, still has not lost its power and ability to move many an audience member to tears.  Following this emotional send off the audience were then raised up again by the positive energy and upbeat lyrics of the final song of the night “What Love feels like.”

With this being the last show on Bostic’s headline tour before heading back to Nashville the party atmosphere lasted well into the evening with Jenn spending almost an hour after the show mingling and chatting with fans, many of whom wanted to share personal stories with her about their deep personal relationship with her music, and which again resulted in tears being shed on more than one occasion, as well as many smiles and laughter.

It also truly felt like an end of tour celebration and family event when fans were invited, as they were leaving, to share a slice of cake (which was a replica of Jenn’s synonymous Nord keyboard) baked by a member of Jenn’s ‘Irish family.’

Given the outstanding performance, her interaction with her fans, as well as their clear feelings of joy at having spent an evening in her company, we can only hope that it is not too long until Jenn Bostic returns to Belfast to wow us once again.