We all like to grumble from time to time and Aaron Watson is no different! The mere mortal can in fact remember the last time he complained about hard work.

It was one summer when he was a young boy and his father, who worked as a custodian at the time, had asked him to help him clean bathrooms at a church. That afternoon, Watson’s friends were wasting their summer away at the pool, and he wanted to be swimming with them.

“I had on yellow gloves, scrubbing toilets at this church,” Watson told CMT in a recent interview, “And I was like, ‘I hate cleaning toilets, dad.’

“My dad is 100 percent disabled from serving our country in Vietnam, and so my dad is a hero first of all; a hero cleaning toilets. My dad peeked his head around the stall, and said, ‘Aaron, do you think when I was a little boy I wanted to grow up and clean toilets?’

“And I never complained about hard work again because whatever you do, you should be the best that you can be. Those are life lessons. That’s a song I’ve yet to write.”

As devoted to his family as Watson is, he’s just as committed to country music. To him, it’s more than an industry and a genre of music. It’s family.

“I’ve been doing this for nearly 20 years, 13 albums, 3500 shows,” he says. “I’m committed. Country music’s special to me because this is not an industry; this is the family business. This is how I take care of my wife and my kids. I want to represent it well. For me, it’s never been about winning awards. It’s never been about No. 1 singles. It’s been about consistently putting out the best product I can put out while staying true to who I am.” 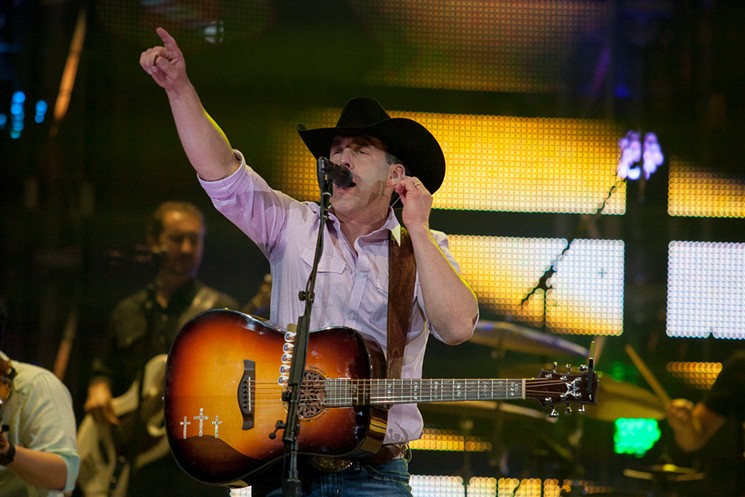 Watson’s interview with CMT.com supported his Oct. 4 concert at Nashville’s Ryman Auditorium benefitting Hurricane Harvey victims. That support continues with the Aug. 24 release of Aaron Watson Live at the World’s Biggest Rodeo Show. The concert was recorded live in front of 65,000 fans on opening night of the 2017 Rodeo Houston, and the release date coincides with the first anniversary of Hurricane Harvey’s landfall on the south Texas coast (Aug. 25, 2017). A $1.41 donation from each album sold will benefit the Rebuild Texas Fund.

Aaron Watson will be touring the UK this Autumn, but has not included any Northern Ireland dates, nor has he announced any Irish Dates.