Tomorrow sees some of the CMNI team head off to Music City USA, Nashville, Tennessee. We’re very much excited and are currently in the process of trying to set up some interviews when we’re over there. Nashville is the home of country music and the home of the ‘Grand Ole Opry’ – the show that made country music famous. It’s the worlds longest running radio show, celebrating 92 years of consecutive Saturday night broadcasts.

We will be at the opry for two magnificant nights where we get to witness the likes of the Charlie Daniels Band, Little Big Town, Brad Paisley, Kacey Musgraves, Frankie Ballard, Easton Corbin, Chris Janson and many more.

We’re really looking forward to our time there and be sure to stay tinned to our social media and website to keep up to date with all thats going on with Country Music NI stateside. In the meantime, here’s some fun opry facts that you may or may not know! 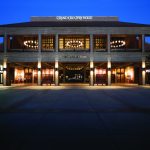 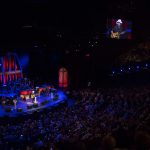 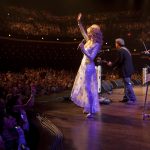 For 4,600+ (and counting) consecutive Saturday nights, the Grand Ole Opry has rung out on the airwaves. It’s the world’s longest-running radio show and now also runs every Friday plus seasonal Tuesdays and Wednesdays in addition to traditional Saturdays.

The Opry returns to the Ryman each year for a wintertime run. Approximately 6,024 songs are performed during Opry shows each year. The Opry has welcomed more than 200 members throughout its history.

The Opry has called the names of country music’s all-time greats, from Hank Williams and Patsy Cline to Brad Paisley and Carrie Underwood. Opry member Garth Brooks says, “The Grand Ole Opry is the pinnacle of what I do. Nothing will ever match being a member of the Grand Ole Opry.”

Opry legend Loretta Lynn celebrated 50 years as an Opry member in 2012 on the same night country group Pistol Annies made its Opry debut. Meanwhile, on Minnie Pearl’s 50th anniversary, she reacted to a videotape message from Dolly Parton by quipping “I wear a hat so folks can tell us apart.”

Opry member Lorrie Morgan made her Opry debut when she was 13 years old. “I thought, ‘this is what I’m going to do for the rest of my life,’” she says. Among the famous faces who’ve played the Opry but aren’t primarily known as country music artists are President Richard Nixon, Kevin Costner, Jack Black, Kevin Bacon, Kenny Loggins, and CBS’ Bob Schieffer and Charles Osgood.

Loyal Opry fan Paul Eckhart bought a ticket for and attended an Opry performance for 2,184 straight weeks from 1972 until 2014. Yes, 2,184. Uninterrupted.

Five Opry members have been honored with their own U.S. postage stamps.

15.8 million feet of audio, video, and lighting cable on the Opry House complex help take country music to the world.