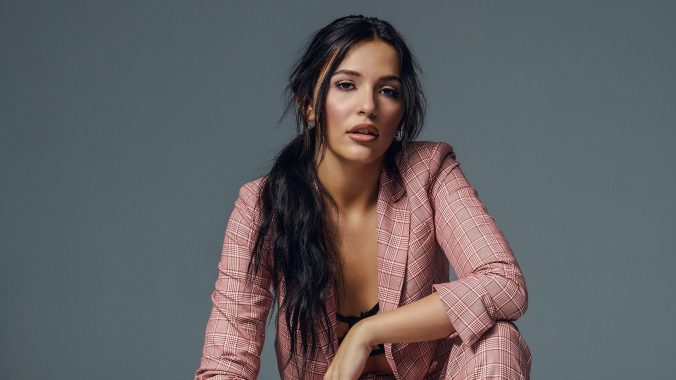 Would the real Lennon Stella please stand up…

They say you only get one chance at a first impression. Whether or not that adage is actually true is as much your guess as it is mine. Country music over time has been reinvented, so maybe it can be done over. But for Lennon Stella, it was important, that first impression is given to the world by her debut EP Love, me.

It would be quite possibly the most important introduction of her career to date and one she didn’t want to leave to chance.

Love, me in so many ways is the first real emergence of the woman behind the artist. Bold, yet vulnerable, clever and sharp, yet even shy in places, it’s the stellar debut every new artist dreams of clinching. It’s surprising in a web of winning ways.

Even though fans of Stella in the role of “Maddie Jaymes” on TV’s Nashville will note her character’s crossover to the pop world as the show came to an end, it’s a real-life transition that may still seem a bit surprising to some. But not for those who know her or “Maddie” best.

“I was expecting a lot more of that comment, of people being like, ’What?’ It’s so different. It’s so different than what she was doing on Nashville.’ I was fully ready and prepared for a lot of that, and I haven’t seen any of it,” Stella told CMT.com in a recent exclusive interview.

“I don’t know how or why, but there has been none of that. I think, too, because, by the last two seasons, they were transitioning my character and setting me up to be a pop star. By the last season, I was very much singing pop music and very much in that world. It was no longer country or folk stuff. I think that that’s what made the transition smoother: that it ended with me as a pop star, and then the music I’m putting out is more in the pop world. I think that that made it less jarring for people,” she continued.

The beauty in watching Stella transition from country and folk to pop on the hit show was that the evolution perfectly captured the diversity that exists within a single artist, in this case both Stella as “Maddie” and as herself.

“Growing as a human means growing as an artist,” she said. “You’re going to grow the same musically and just evolve as a person. I think it’s important to allow yourself to do that and not put yourself in a box.”

Because not allowing herself to grow and evolve would mean limiting her potential and her art.

“That’s my biggest fear,” she revealed. “Honestly I’ve seen so many times where artists will almost turn ’schticky,’ where they have this ’thing’ where it’s so specific and it’s so narrow with this look or this sound. Then they just get stuck and then they can’t move. They’re bored, and everyone’s bored.”

“I want to always be able to just change and evolve. Yeah, totally, stick to my roots, not completely change but definitely have the freedom to grow.”

She wants the freedom to be real and authentic, because authenticity translates, and perhaps that’s why the fans and public have embraced it with open arms, no questions asked.

It’s also put her in a very special hierarchy of artists with the likes of Kate York, Erin McCarley and Sarah Buxton, just a handful of Nashville’s elite singer-songwriters who also happen to be exemplary humans. Buxton and McCarley joined Stella for a string of sold-out shows and for Stella, the kinship and collaboration have been invaluable.

I feel a way I’ve never felt before. I’m absolutely leveled. I genuinely cannot explain in words how much tonight meant to me and how loved you guys made me feel. ugh. on cloud 9. I’m bout to bombard you with pictures and videos but here are some photos from soundcheck that the loveliest @_blythethomas took 🖤

“They’re the best,” she said, smiling. “They’re so awesome. It was a dream having them just for my first run of shows to have such experienced women that I really look up to as humans, and also as musicians, in every way, honestly. I look up to both of them so much. Just having that comfort was so nice and so inspiring. It was a dream. I want them to come with me everywhere.”

So what’s next? More music, of course. But also time. Time, hopefully, will continue to be on her side. Because the freedom she was given while on the show gave her the time to explore and find that magic she was after all along.

“I’m just going to take a second to write before going to the tour, and then hopefully after the tour make the album, and just sit down and actually go in and really dive into that,” she said.

“I just don’t want to rush that. I don’t know, the album is such a thing. I want to go and actually have an album-making experience.”

Stella will embark on the Love, Me Tour beginning Mar. 19 in Toronto before landing in the states Mar. 22 in Boston. Over half the dates have already sold out.

A new song and a new tour for Maren Morris