July 30, 2019 / Chris Armstrong / 0 Comments
Joe Nichols has announced the release of brand new acoustic versions of two of his hit songs – ‘Yeah’ and ‘Sunny And 75’ – both out this Friday (2nd Aug), the first new music since the ‘Never Gets Old’ album and the ‘Never Gets Old: Traditional Country Series’ covers collection. Fans tuned into the Chris Country Radio breakfast show this morning to hear the premiere of ‘Sunny And 75’, and ‘Yeah’ will get a world exclusive first play on the BBC Radio 2 Country Show this Thursday (1st Aug) from 9pm. 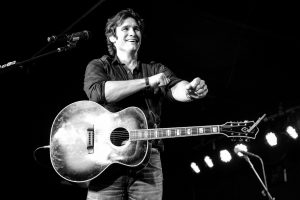 Joe Nichols has been gaining international fans and receiving airplay worldwide throughout his career as a recording artist, partly thanks to the huge success he’s enjoyed on the US charts, with fourteen Top Ten singles, six of which claimed the #1 spot, such as hits like ‘Yeah’, ‘Sunny and 75’, ‘Brokenheartsville’ and ‘Tequila Makes Her Clothes Fall Off’. Following a much-anticipated return to Switzerland to headline the Gstaad Festival this September, Nichols will showcase his versatility by going from a summer performing across America at sold-out festivals and arenas – including sharing the stage with Garth Brooks in front of an 85,000-strong crowd in Denver (watch the footage here) – to intimate acoustic shows, playing for fans in the UK & Ireland for the very first time, with the London venue being upgraded due to demand and an additional date added in Killarney – limited tickets remaining for all shows:
23rd September – Thekla, Bristol
24th September – Night & Day Cafe, Manchester
26th September – St Pancras New Church, London
27th September – The Bodega, Nottingham
29th September – INEC, Killarney 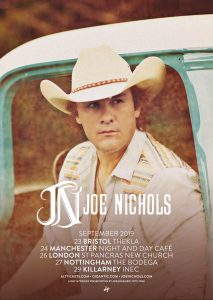 Nichols said: “As just a taste of what we’ll be playing over there, I wanted to give y’all a couple of acoustic songs from the previous couple of records; ‘Sunny And 75’ and ‘Yeah’, and that’s a little bit of what to expect coming up for the show – so, hope to see everybody there. I’m excited, I can’t wait!”

ABOUT JOE NICHOLS:
Multi-platinum recording artist Joe Nichols is one of Country music’s most praised traditional Country artists. His latest album ‘Never Gets Old’ is available now, a follow up to Nichols’ album ‘Crickets’, which debuted in the Top 3 on the Billboard Country Albums Chart and spawned the two multi-week #1, RIAA gold-certified hits “Yeah” and “Sunny and 75.” Nichols has six #1 hits and five Top 10 singles to his credit, including chart-toppers like “Brokenheartsville,” “Tequila Makes Her Clothes Fall Off,” and “Gimmie That Girl,” and Top 10 smashes like “If Nobody Believed In You,” “What’s A Guy Gotta Do,” “Size Matters,” and “I’ll Wait For You.”

The 4X Grammy nominee is the winner of the Academy of Country Music’s “Top New Male Vocalist” award, the CMT “Breakthrough Video of the Year” award and the prestigious “Horizon Award” from the Country Music Association. Nichols is currently touring the U.S. performing his own headlining dates, and will tour the UK & Europe in September 2019.