With just a week until Friday 11th October, The Farmers’ Bash is set to descend on the SSE Arena, Belfast, for its third year in a row – with promises to be bigger and better than ever.

After the summer-time success of the Farmers’ Bash on the Beach, which sold out to capacity in Portrush, a predicted crowd of 9,000 and more country music enthusiasts are waiting in anticipation to travel to Belfast from all across Ireland, Scotland and beyond, to dance and jive the night away at Ireland’s biggest indoor country dance. 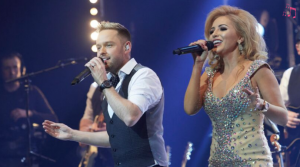 Fans will also be in for a real treat this year, when two of Irish country music’s biggest stars – Derek Ryan and Cliona Hagan – will exclusively perform their Number 1, brand new duet single ‘Only Getting Started’ live together for the first time. Show opener Cliona will join headline performer Derek Ryan to close the show, in what will be elation for fans of the two singers.

The Farmers’ Bash promised its third year would be “the biggest show yet”, and this year’s line-up does not disappoint, as joining Derek Ryan and Cliona Hagan will be country favourites Mike Denver and Johnny Brady. The Farmers’ Bash are also known for their much-anticipated ‘special guest’ line-up which this year includes The Wurzels, best known for their Number 1 hit ‘The Combine Harvester’, who are sure to have the country crowd all on their feet. Plus, Youtube viral sensations Steve N Seagulls.

With ticket availability now limited, country music fans wanting to go to one of the biggest nights of the year can buy tickets at www.ssearenabelfast.com.