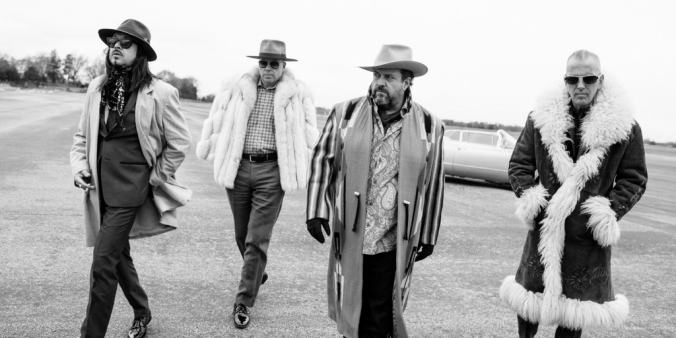 A ‘Brand New Day’ for the Mavericks

The Mavericks is a name you might of not heard since their single ‘Dance The Night Away’ was in the UK charts in 1998, spending a respectful 18 weeks in the chart and peaking at No. 4. However, to anyone who has followed them closely, you’ll know they’ve had a very vibrant history featuring many ups and downs, twists and turns and next week, their path leads them to Belfast, to the Limelight. As they prepare to take to the stage on Tuesday 5th February, we take a look back and perhaps take a moment to give the band the recognition they deserve.

The Mavericks were founded more than 25 years ago by Raul Malo and Paul Deakin as a standout alternative band in a Miami rock scene dominated by heavy metal and punk. During their time in Miami they were picked up by producer Tony Brown from Nashville. Producing since the 80s, Brown is famous for having worked with Reba McEntire, Vince Gill and George Strait. When The Mavericks got signed to innovative MCA Records, they upended expectations in country music. Their blend of Cuban grooves and Bakersfield-inspired twang netted them several CMA and ACM Awards plus a Grammy in 1995. They charted numerous singles and albums while earning accolades as one of the finest live bands in the business.

Between 1991 and 2003, the band recorded six studio albums, in addition to charting 14 singles on the Billboard country charts. In 1996, The Mavericks won a Grammy Award for the song ‘Here Comes the Rain.’ The band split up in 2004, and lead singer Raul Malo released six solo albums. Bass player Robert Reynolds and keyboardist Jerry Dale McFadden co-founded the ‘supergroup’ SWAG. It seemed that was it for the Mavericks.

However in 2012, the band announced plans for several reunion festival dates. Shortly after, they were offered a record deal by Big Machine Records. There was some time off and re-jiggering of personnel, but they came back strong with 2013’s album, ‘In Time’ and 2015’s ‘Mono’, albums that provided abundant material for a refreshed and unmatched stage show.

As always the road to success is never an easy one and in late 2014, co-founder Robert Reynolds was dismissed from the group for drug addiction, ending his 17-year run. With Brand New Day, however, they look ahead to brighter horizons.

“We’ve traveled a lot in the last four years. And we’ve come back from a hiatus of nine years to find a brand new purpose — not just to go out and play for tickets and do the oldies,” says Eddie Perez. “Not many bands get to come back from that long to have another moment like this. So I believe it to be quite special.”

Their latest album ‘Brand New Day’, released in March of last year was their ninth studio album and so far has peaked at 31 on the US Country chart. A collection of 10 tracks, ‘Brand New Day’ allowed Malo and the band the freedom to work without the constraints of a major label for the first time ever (the Mavericks amicably parted ways with Big Machine’s Valory Music Co. last year after two albums). They recorded at an unhurried pace – first at Capitol Studios in Hollywood, then in Nashville – and ignored the rules of radio, focusing instead on a Latin and country influenced version of rock & roll’s early days, before the genre firmly branched away from its country and blues trunk.

A great finish to 3 amazing shows in Europe! Thanks to our fans who came to see us at @indigoatTheO2, @TiVre_Utrecht & @GloriaTheater! pic.twitter.com/7nl2qdI4Hr

As well as Belfast, the Mavericks this year will be kicking off their European tour in the UK, Bristol, followed by London, Glasgow, Dublin, Birmingham and Manchester. For a full list of locations and tour dates, check out www.themavericksband.com.