This week we had the wonderful privilege of catching up with Mandy Barnett ahead of her Belfast appearance with the Ulster Orchestra. We chatted influences, spare time and the pressures of the music industry.

You can’t get much more country than growing up in Tennessee! Was it always country music or did you have any other inﬂuences?

My influences were pretty broad.  Growing up, I listened to many styles of music: gospel, country, rock, and pop.  At a very young age, I sang gospel music in church, and around age nine, I got turned on to Patsy Cline, Tammy Wynette, and Connie Francis, among other great country and pop singers.  My mother and grandmother loved music and introduced me to some of the greatest singers and songs of all time in various musical genres.  Outside of country music, songs written by Cole Porter, Irving Berlin, and the Gershwins really attracted me—so did singers like Kate Smith, Frank Sinatra, and other “big” voices.  One of the fun things about my upcoming Ulster Orchestra concert is its mix of country and pop.  It’s a show that features songs and artists that made Nashville famous.  I call it my “Nashville Songbook” concert honoring classic country songwriters and artists, but also songs recorded by Roy Orbison, The Everly Brothers, Elvis Presley, and Brenda Lee.

When you get a bit of downtime, who do you like to listen to currently?

I’m all over the place!  On any given day, I might be listening to classic country, classic pop, R&B, or even 80s rock.  It’s an eclectic mix.

During the late 90s you were performing as Patsy Cline in the stage show “Always . . . Patsy Cline”. How’d it feel getting to perform at the Ryman at such an early age?

Over the years you have been given much praise and acclamation over your work and voice. It’s a great gift to share with people, do you ever feel the pressure or do you remain calm at all times?

I feel so privileged to be able to do what I do.  Performing for audiences is a joy, but no, I do not remain calm at all times–ha!  I sometimes still get a case of the nerves and always put pressure on myself to be the best I can be.  I practice and never take anything for granted.  I also feel a lot of satisfaction singing so many of these classic songs, songs you don’t hear as much on the radio anymore–but people love them, and they will live on long past our time.

We see you’re just as much about the music as the words, having previously performed with the Nashville Symphony Orchestra, are you looking forward to coming to Northern Ireland next week to perform with the Ulster Orchestra?

I’m extremely excited to perform with the world-class Ulster Orchestra.  I’m very much about the music, and these songs soar and come alive with an orchestra.  For example, there is nothing better than hearing that stirring string intro on “Sweet Dreams” and all of the wonderful instrumentation behind me.  It’s truly inspiring.

Will you get a chance to see much of Northern Ireland when you’re over here?

I plan on exploring as much as I can.  I’ve never been to Belfast, so it’s a great opportunity to not only perform in this beautiful city, but to sneak in time to be a tourist.

We’d like to thank Mandy for taking time out to talk to us. There are still some tickets available for her Nashville Songbook performance on Wednesday 2nd May at the Belfast Waterfront.

If you’re feeling lucky you can enter our CMNI competition to win tickets here. 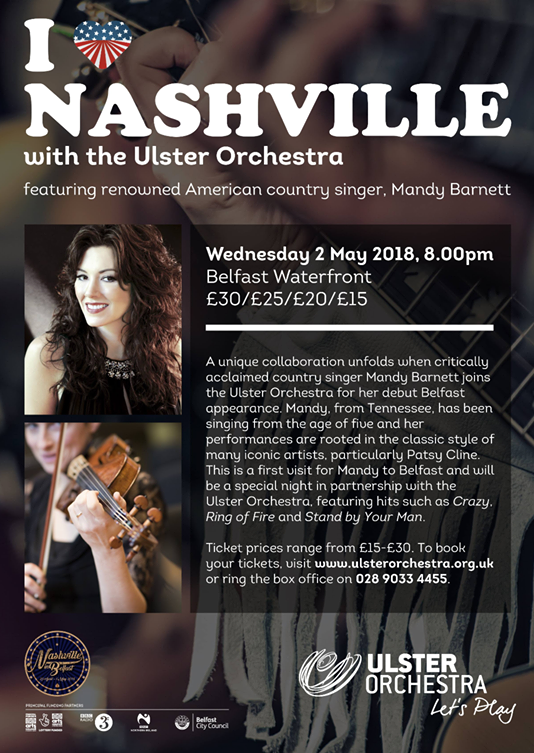